You are about to read a Spiritual/Philosophical Newsletter. This issue dealt with the so called “celebration” of  what is known today as “Easter”, and was emailed to a few friends and family Members in early January 2009.

Hope you Enjoy it.

It reads as Follows;

You Are About to Read a Badbrey Newsletter..

As you may or may not know,
I have studied vasts amounts of information (outside of my mainstream educational studies) for over ten years now. During this time I have covered a wide range of subjects in great detail, to the point where a lot of this knowledge is now “second-nature” to me. I have thus, decided to  share  this “gnosis” (for want of a better expression) in the form of theses newsletters.

This issue deals with the origin of the well known celebration of “Easter”.

First of all, the date of this so-called celebration depends on when it falls. “Easter-SUNday” is the first Sunday after the “Paschal-Full-Moon”. The 14th day of this Lunar month is known as the “ecclesiastic full moon” and falls on or after 21st March (depending on the moon table calculations).

Click on the link below to “witness” a diagrammatic representation of both of the equinoxes as well as the solstices.   (the period of the winter solstice is when  the celebration of Christmas on December 25th takes place  and is based on the ancient Roman festival of Saturnalia which will be covered in detail in the coming weeks in future newsletters)

As far as I am aware, it is common knowledge that Spring is the time when the trees begin to blossom on their arrival to life  as they rise from the “dead” of the winter period. As well as the birds building nests as they ready themselves to lay eggs and rear young. A great many, in fact nearly all animals give birth to young during this time. In ancient times, us human beings used to follow this “cosmic-law” but it was altered when we became “civilised” ..lol. It is for this reason that various deities where chosen by ancient native people all over the world to represent various celestial events.

In this instance, to coincide with the natural “cosmic-law” of reproduction, replenishment and new-life, various names were given to deify the personification of the event in question. It is accepted by researchers and historians that many ancient peoples chose  to represent this event by using the form of a female archetype or goddess.

I will give reference to one example of the intertwined relationship of the goddess, known as Ishtar to the Sumerians, with the celebration of “Easter“. Ishtar, also known as the Moon Goddess (The moon being a representation of the female creative energy from ancient times) , was their chosen representation of the celestial phenomena taking place at this time (Vernal Equinox/Spring in the Northern Hemisphere). She was the goddess of Love War and Procreation.

In a nutshell, there is a time when Ishtar, the daughter of Sin (the moon) enters the underworld in order to find a sacred elixir that would restore the life of her son and husband Tammuz. She descends through the “seven gates” of the underworld in the process. As she passes through each gate, she looses an item of clothing until she is, finally rendered naked. As Ishtar represents the “spirit of Fertility”, all of the crops on the land suffer while she is away. As well as the ripening of crops, the maturing of all life on earth is also effected. (my speculation is that her clothes being removed represent the withering away of the crops on land that she left behind etc…). The gods then realise that all of life on earth is suffering due to her absence so they demand that she returns, and in doing so all life on earth is restored. (So therefore we have the use of “Easter-Eggs” and “Easter bunnies” to represent fertility. Also, the “Easter Bunny” was an Anglo-saxon symbolic earthly representation of their version of the goddess of fertility who was known as “Eastre” This is where the term Easter, as we know it today, comes from. Easter is also the true pronunciation of Ishtar.)

The above summarisation is an allegorical tale of the beginning of spring where Tammuz represents the Sun and Ishtar represents the return of fertility and the beginning of Spring. For this reason, many ancient cultures celebrated the “New Year” at this time (which makes a lot more sense to me as oppose to today, within this western society, new years DAY is celebrated in the middle of the NIGHT, in the middle of WINTER when some animals are hibernating, migratory birds have gone to the southern hemisphere for the warmth there and most trees are without leaf…lol and temperatures are BLITZ[old East-London-esque Slang used to describe “extremely cold” weather]..lol)

Now the story of Ishtar is extremely similar to the tales of many ancient deities where a goddess has a son who is killed and resurrected in an attempt to explain, in allegorical terms, the journey of the sun and/or the climatic change of the planet during this period = Spring. I wont post all of the stories here as it will take to long but I will give references to some of the names of this same deity, do with them as you wish;

In the story of Ast/Auset/Isis, her husband Asar/Ausar/Osiris, who was symbolic of the sun, was killed by Seth or Set. Set was associated with darkness (part of the etymological background of the term Sun-Set) and evil, he cut Asar/Ausar/Osiris into fourteen pieces and scattered them. However, Ast/Auset/Isis found 13 of the pieces and was unable to locate the  14th…etc. To cut a long story short, she gave birth to Heru/Horus who was the sun, sorry, i mean son of Asar/Ausar/Osiris. Heru/Horus was also representative of light, the sun and was also god of the sky. This story is an allegorical tale of the journey of the sun. 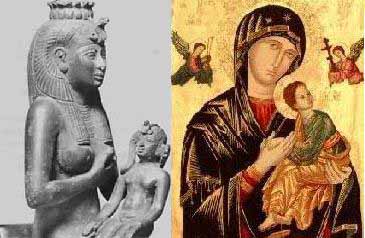 The above link shows the Christian pictorial version of the story of the sun (Notice the Halo behind Jesus’ head as well as that of Mary. This Halo is representative of the sun), however this is not taught in that format in christian schools or churches. It is also not taught that the story of Jesus and Mary is a “remix” of these earlier tales either. What is also disappointing is the fact that “Atheists” would use this to dispute that the whole story surrounding “Easter ” is “make believe“, which I find equally erroneous.

The story that most are familiar with of Jesus being crucified and appearing to his mother, rising on the third day is but another version of these many tales which are told cryptically and allegorically to conceal the explanation of the movement of celestial bodies and the effects they have on the planet  exoterically as well as  esoterically.

The terminology of “Easter”  used in the bible KJV is as follows;

Acts 12:1-4 Now about that time Herod the king stretched forth his hands to vex certain of the church. And he killed James the brother of John with the sword. And because he saw it pleased the Jews, he proceeded further to take Peter also. (Then were the days of unleavened bread.) And when he had apprehended him, he put him in prison, and delivered him to four quaternions of soldiers to keep him; intending after Easter to bring him forth to the people.

The above reference is in fact a reference to the celebration that I have explained already, at that time (If the Bible is to be taken as historical documentation) it had nothing to do with Jesus as Easter is a translation of the word “Pesah” which, literally translated, means Passover. In 1611 AD when the Bible was first translated from Latin to English, this word was replaced with the word “Easter”.

Those in control of the paradigm of “Christiandom” will not admit that their “Easter-Story” is but another remix of those of old. They prefer to instead “convince” followers that the story is a formulation of entirely Christian Origin and that to question it is to question God himself and to therefore risk going to hell for ETERNITY, thus so allowing people to remain “dumbed-down” as to the true origin of “Easter“.

As far as I am concerned, if the intention is to turn this celebration from a form of “Pagantry” ..lol into a fully Christian (which also falls into the category of Paganism) celebration of Jesus’ death and resurrection, then the term  EASTER has no business in being used within the Christian church as it is misleading followers into blindly taking part in the celebration of fertility and the goddess Ishtar/Eastre/Europa etc…!

In conclusion, Easter is a celebration which took place across the whole of the ancient world in an attempt to explain, through deification and via cryptogram and allegory, the movement and effect of the celestial bodies on this place we call real-ity. The physical explanation of this is the journey of the sun and the moon where their said cycles effect the growth and life cycle of life on this planet (Birds trees, animals seasons etc…). However, in addition to this FACT, there is also, concealed within these tales, the spiritual and esoteric nature of “man” and how we are continuously seeking to be reunited with the source of creation (Ether) itself, whom many refer to as God.

I am in no way saying, “Christianity is wrong, The Church is Evil, Stop What You Are doing At Once etc”….lol. Individuals are free to carryout worship in what ever way they want. However, what I am saying is by independently researching subjects yourself, you are more likely to make up your own minds instead of falling prey to what I call my arch-enemy, DOGMA.

Most individuals I come across continue to take part in a variety of practices and celebrational rituals although they have absolutely no  idea as to  the true origins of what they are taking part in and why they are doing it. To me, it equals = DOGMATIC BEHAVIOUR. When I pose, to such individuals, the question of why they actually take part in celebrating Easter and why they purchase Easter Eggs and Chocolate Bunnies, they usually tell me something along the lines of…”Because we are celebrating The life and death of Jesus, Eggs represent New Life”. While this explanation is not entirely incorrect, it is, when broken down critically in light of the information available on this subject, a somewhat superficial explanation as to what they are celebrating and why.

(There is a lot more I could cover pertaining to this subject but it would take too long and take up to much space. However, the information I provided should, I hope, suffice..)

Say No to DOGMA

Stay Tuned for more Badbrey Newsletters in the coming weeks…….